"Reszke, who divides her time between the United States and Poland,
has given us a book that helps explain the complexity of Jewish life in modern Poland."

"Return of the Jew is not a diary, confession, or manifesto in which the author places herself front and center. Rather, it is a theoretically informed and fine-grained study in which Reszke uses her dual positions as an insider within that small community and a social scientific outsider to extract rich and earnest narratives from her interviewees and then critically analyze them. The result is a textured account of identity building. . . . Reszke's insightful analyses of the narratives that third-generation post-Holocaust Jews have created to explain, to themselves and others, their identifications and personal trajectories are an important contribution. It opens the path for studying the relationship between the Jewish revival and Polish philosemitism. As such, this book will be of interest to anyone interested in understanding this new twist in Jewish life in contemporary Poland and, more broadly, the complex dynamics of identity formation in societies that have endured radical traumas and ruptures."
--Genevieve Zubrzycki, University of Michigan, in the Slavic Review, vol. 73, no. 2 (Summer 2014)
﻿

"This is the book I have been wishing for 20 years that someone would write."
By J. Shawn Landres on January 26, 2014

Format: PaperbackIt's rare that I have the time to read any book all at one go - especially an "academic" one - but this I couldn't put down. This is the book I have been wishing for 20 years that someone would write.

It speaks directly to what it means for so many of my friends and family - and in some respects for me - to be Jewish. And it does so with both serious and sustained attention to the academic literature and and deep and committed empathy for the human realities at stake.

It should be on every "contemporary Jewish identity" course syllabus and required reading for anyone contemplating research on emerging Jewish adults anywhere near Europe (and given air travel, everywhere is near Europe).

"Reszke's book is among the smartest and most insightful investigations of Jewish identity that I've ever read.  Look no further than Reszke's fine ethnography.  It has much to tell us all about Jewish identity in the Polish present and the global future."
- Professor Ari Y Kelman, Jim Joseph Chair in Education and Jewish Studies, Stanford University

Connie Webber's review of "Return of the Jew" published by Jewish Renaissance, October 2013 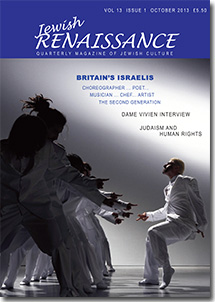 Excerpts from the review:

>>‘How many Jews live in Poland?’ Katka Reszke’s fascinating book makes it clear why it is difficult to answer that question, so often asked. Thoughtful and articulate, Polish by birth and Jewish by destiny (actually by birth too, though she discovered that only in her late teens), she is perfectly placed to present the experience of young adults in contemporary Poland who discover--- or as she graphically puts it, ‘stumble over’---their Jewish roots. << >> The book abounds in vignettes that clarify the predicaments, the passion, and the pain involved in constructing a Jewish identity in today’s Poland. << >>… if you want to understand contemporary Jewish life in Poland, this is the book to read.<<

Reviews for Return of the Jew:

“Uniquely positioned as both an insider and an acute outside observer, Katka Reszke provides an insightful analysis of a controversial and still developing phenomenon that has bemused, perplexed and sometimes enraged the outside Jewish world. In doing so, she gives rare – and welcome -- voice to the actual protagonists, Poland’s “new Jews,” and sets in complex context their unprecedented, and often poignant, quest for place, identity and selfhood amid the brave new Jewish realities of post-communist Poland.”
--Ruth Ellen Gruber, Writer, Researcher, Journalist, Author of “Virtually Jewish: Reinventing Jewish Culture in Europe”

“Most Jews think there are no more Jews in Poland. This is not true even though in comparison with the millions of Jews before World War II the present number seems like nothing. The Jews who were born in Poland after the war and have lived there come mostly from assimilated and mixed families. Their search for roots and their readoption, or reconstruction, of some sort of Jewish identity provides for a fascinating story. Katka Reszke has been able to tell the story, building on her own involvement in it and on many interviews with young adults. The book gives an insight into their identity search and the expansion of Jewish presence in present day Poland -- an unexpected bonus of the demise of Communism in 1989.”
— Professor Stanislaw Krajewski, the University of Warsaw, Poland, Author of "Poland and the Jews. Reflections of a Polish Polish Jew"

“What does it mean to be young and Jewish in Poland today? Katka Reszke explores the phenomenon of the revival of Jewish life in contemporary Poland through a series of interviews with her contemporaries and gives voice to a generation whose search for its Jewish identity resonates throughout the Jewish world. She provides unique insight into one of the most meaningful, most uplifting stories in the Jewish world today: the reemergence of a Jewish community decimated by the Holocaust and largely driven underground by post war communist oppression.”
— Jonathan Ornstein, Executive Director of the Jewish Community Center of Krakow

AMAZON Customer Reviews
5.0 out of 5 stars