The Haunted Little Town of Lapy. World Premiere of "Castaways"
by Katka Reszke 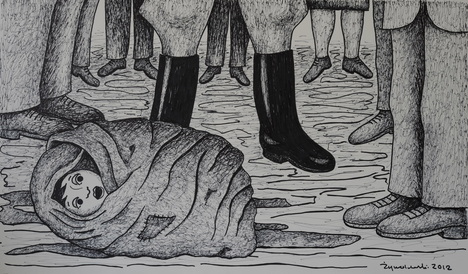 
On a warm late summer night, filmmaker Slawomir Grünberg arrived in Lapy (in Polish: Łapy; pronounced: wahpeh). A wireless microphone attached to his shirt, Grünberg approached the building leaving his camera behind in the car with his friend, the driver. All of this in the hope of convincing the single 'invisible protagonist' of the film to break her silence.

The documentary “Castaways” premieres January 21st at the New York Jewish Film Festival. Slawomir Grünberg who is an Emmy Award winning Polish Jewish Director/Producer based in New York co-directed the film with Tomasz Wisniewski, a Polish researcher and documentarian who devotes most of his time to studying Jewish heritage in northeastern Poland. When Grünberg learned about the footage acquired by Wisniewski, we decided to team up and try to create a film which would do justice to this disturbing story.

Slawomir Grünberg and myself have been working together for over five years. During this time, I edited six other Holocaust-related documentary films. But after several hours of reviewing the footage of "Castaways" I found myself crying and cursing and literally unable to even begin to put this story together. It took a few days before I was able to put myself back together. And as speechless as the story had me at that point, I began editing precisely the 'speechless', silent sequence of the film.

The story is set in Lapy, where eight local witnesses in their late 80s and early 90s recall the memories of the Nazi occupation. The majority of them were teenagers at the time and most of the memories are their own while some have been passed on to them by the parents. The story of “Castaways” is just a chapter in the dreadful period of the Nazi occupation of Lapy. But it is one which is likely to strike many as the most heartbreaking one of all.

Before World War II, Lapy was a town of about 4000 residents, among them some 630 Jews. In the summer of 1943 the Nazis began the last transportations of Jews from the Bialystok region to the Treblinka death camp. When passing through the town of Lapy, the trains would slow down significantly. Reportedly, several dozen children were thrown from the wagons through small windows.

The witnesses report that by the time the last transports to Treblinka began, the Lapy gendarmerie had already been warned about the attempts to cast children off the trains in that area and - tragically - almost every train was followed by a special patrol. Consequently, the Nazis were able to pick up and murder almost every Jewish child lying by the tracks. Only a true miracle would allow for a child to make it out alive.

Grünberg rang the door of the apartment where he was told he would find her – the only known survivor. Thrown from the train as a small old child and picked up by a local family, the girl whose given name was not made known to us grew up in Lapy and lives there till this day. After a few rings, an aggravated male voice yelled through the door, “Who's there?”. “I was wondering if I could speak with Mrs. X...”, Grünberg replied politely. He was able to find out what the woman's married last name was. “Go away! Mrs. X is not available to talk”, the voice replied decisively.

History has it that most of the Jews of Lapy had actually escaped before the Nazis came into town. The majority sought shelter in the forests and in nearby towns and villages, while some stayed behind and were juggled between the local rescuers and collaborators. There are testimonies which mention the very complex history of anti-Jewish sentiment and activity during the war, as well as those which talk about a small network of local Poles risking their lives sheltering and helping Jews in the town of Lapy and the surrounding villages. When asked about the rescue activity in Nazi-occupied Lapy, the eight living witnesses would reply, “Sure, there were some people who took Jews in, but most people were to scared to do this”.

In the course of further research (beyond our documentary's narrative) we were able to come across some information about a priest in Nazi-occupied Lapy who was uniquely sympathetic to the Jews and not only provided shelter to several people with the help of a small network of his parishioners but also used his public sermons to appeal to his faithful asking them not to reveal the hiding places of Jews in the area - an approach which was extraordinary and rather uncommon among Polish clergy during World War II.

Father Henryk Baginski survived the war and served as a priest in Lapy until his death in 1956. The local parish today is in fact named after him. And yet, when you read Father Baginski's biography published on the local church's website you will find no mention of his rescue activity during the war. The word "Jew" is absent from the parish website just as it is absent from all of today's Lapy.

Grünberg's friend became nervous and cried, “Sławek, let's go before they call the cops”. But Sławek Grünberg was persistent and decided to dial the phone number he had for Mrs. X to see if he would be able to persuade her to talk over the phone. Curiously, the number turned out to be Mrs. X's daughter-in-law's number. “I came from far away and was really hoping to be able to talk to Mrs. X. Do you think it would be possible?”, Grünberg pleaded. “Listen, I know exactly why you're here...” - the daughter-in-law lowered her voice, “But trust me, there is no way she will talk to you. Let me put it this way: most of the people in this town know about all of this, and her children also know from third party, but she would never talk about this herself, not even to her own children.”

Just as we will never be able to learn how many Jewish children lost their lives along the railroad tracks in Lapy, we may never be able to find out how many may have been rescued. The single survivor we do know of appears to be kept a secret and perhaps there were others whose secret is even better kept... In fact, when visiting the town of Lapy today, you may get the impression that the entire history of Jewish existence in the area is being kept a secret.

Just outside of town near the railroad tracks you will come across a large rock monument which commemorates "The heroic Polish children". Even the locals find themselves bewildered by the plaque. The children who lost their lives over there may have been Polish citizens, their families may have even identified with Polish culture, but being on those trains, jumping from those trains and dying at the hands of the gendarmes was all part of those children's Jewish fate.

70 years have passed since Mrs. X was taken in by a Polish family in Lapy. Grünberg understood that if she never found it in herself to mention this to her own children, then he wasn't going to succeed in breaking her silence.

In “Castaways” the fragile memories of the living witnesses are featured alongside a sense of a vast silence – that of the “secret survivor”, and that of the world gone wrong.

The world premiere of “Castaways” directed by Slawomir Grünberg and Tomasz Wisniewski, edited by Katka Reszke, will take place on January 21 at 6PM (with an additional screening on Jan 22 at 4PM) as part of the New York Jewish Film Festival at the Walter Reade Theater of Lincoln Center.


Katka Reszke is a writer, filmmaker, photographer working in the U.S. and Poland. She is the author of “Return of the Jew: Identity Narratives of the Third Post-Holocaust Generation of Jews in Poland”.